Our one hour walking tour, Four Centuries of Albany Corruption and Reform, offers a fascinating glimpse of this venerable city's colorful past (and present).

​"...a museum that would not only detail Albany's many political scandals but also offer some possible solutions to corruption."

FROM ALBANY TO BROADWAY!

Lin-Manuel Miranda's 'shout-out' to The Museum of Political Corruption

Alex Gibney has been called “the most important documentarian of our time” by Esquire Magazine.  Gibney’s work often centers on themes of corruption and social justice.

“Gibney has been an essential voice in exposing corruption,” offered MPC trustee and Chair of the Award selection committee Karol Kamin. “The Nellie Bly Award honors his powerful and impactful body of work and his mission to bring clarity and awareness to the public.”  Read full press release here. 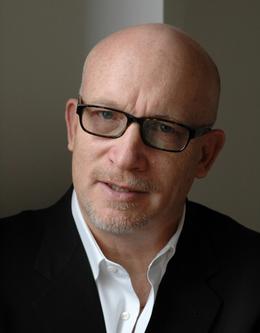 Thank you for contacting us! If needed, you will hear back within 48-72 hours.

Our Virtual Museum and New Branding Will Soon Be Launched!

Big changes are in store for the Museum of Political Corruption! We will soon launch our Virtual Museum and simultaneously roll-out an entirely new look, thanks to the celebrated graphic design firm FROST*Collective of Sydney, Australia! We'll introduce small portions of our new look in the coming days but save the bulk of our branding and new logo for the launch of our museum.  We'll give you one hint, though. Purple will figure prominently in our new look.  As FROST* states: "The vibrant, fresh purple represents an organization independent of 'left' and 'right' views, concerned instead with values of equality and empowerment.  This is US as we seek to educate and empower the public!  ​

"...an idea whose time has come. If I were passing through Albany, I'd visit, that's for sure!" 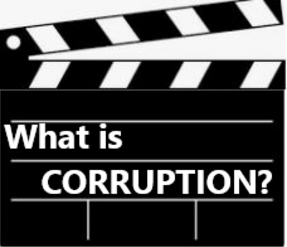 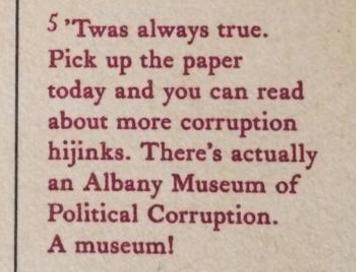 LEARN more about The Museum of Political Corruption.  Download our brochure.

Your 10 Second Video Could Become Part of Our Museum! 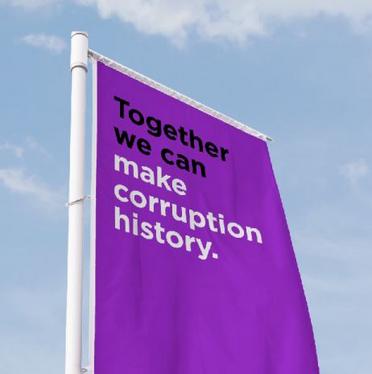 - Editorial Board, The Poughkeepsie Journal

LEARN MORE ABOUT OUR CURRENT EXHIBITION

THE CITY IS OUR MUSEUM!

Lin-Manuel Miranda, creator of the hit Broadway musical HAMILTON, references us on page 137 in his book on Hamilton! ​

While The Museum of Political Corruption does not investigate corruption, we want all citizens to feel that they can make a difference.  If you suspect corruption is happening, we encourage you to share your concerns with your state Attorney General’s Office (in New York: https://ag.ny.gov/bureau/public-integrity-bureau) or an appropriate ethics watchdog organization (for NY, it would be the New York State Joint Commission on Public Ethics at  https://jcopeny.gov/contact-us).

We invite you to submit a 10 second video on what corruption is (or what corruption means to you).  These videos will appear in an exhibit we're creating for our virtual museum called "What is Corruption?"  So get out your phones and film away.  A couple things: Your video should begin with the words "Corruption is.....", hold your camera/smartphone horizontal while filming, and don't use this as an opportunity to rag on any individual politician or party (remember, there's plenty of corruption to go around!). We're not looking for a dictionary definition. We're interested in your genuine thoughts on what corruption is.

Please send your videos to:

(you may need to cut/paste the address) ​