ADULT BRIBE: $12.50
CHILDREN'S BRIBES* $6.50
*CHILDREN UNDER THE AGE OF 12, BUT PARENTS ARE ENCOURAGED TO LIE ABOUT THE AGE OF THEIR CHILDREN.

CORRUPT POLITICIANS GET IN FOR FREE

EVERY TUESDAY IS COUPLES DAY!  BRING A FRIEND​ OR CO-CONSPIRATOR!

Our Gift Shop is open!

What Would You Do?

The 4th annual Nellie Bly Award for Investigative reporting ceremony was held on Zoom on September 24th and was a great success!  The evening included surprise appearances by those who admire her and know her work well, including David Remnick, Ronan Farrow, Charles Lewis, Daniel Zalewski, Zephyr Teachout, and former Nellie Bly winners Susanne Craig and James Heaney.  The event was emceed by WAMC's Senior Director of News and Programming Joe Donahue and included an extended interview and Q & A period. 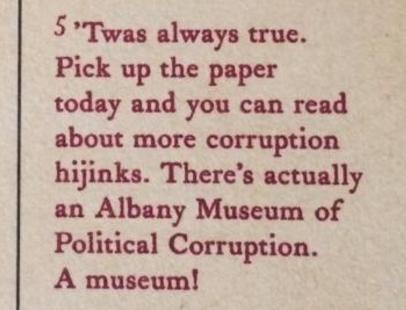 "...an idea whose time has come. If I were passing through Albany, I'd visit, that's for sure!"

Wish to volunteer your time, expertise or share your ideas?

THE CITY IS OUR MUSEUM!

Take a "Corruption Walking Tour of downtown Albany this Halloween!

CORRUPTION IN THE NEWS:

- Editorial Board, The Poughkeepsie Journal

Get a Kickback, an "Original MPC Cover-up!" TM, a "Mug-shot" Mug TM, or the latest fashion in Corrupt-Wear TM

Thank you for contacting us! If needed, you will hear back within 48-72 hours.

LEARN MORE ABOUT OUR CURRENT EXHIBITION

Join us on 10/31 at 1 PM at the corner of Division Street and Broadway as we take a Corruption Walking Tour of downtown Albany. Filled with tales of speakeasies, gangsters, bootleggers, kickbacks and more, our Walking Tour offers a fascinating glimpse of the city's colorful past (and present). To keep participants safe, masks and social distancing will be adhered to. The tour will be limited to 10 and registration is required by emailing AlbanyMPC@gmail.com.

OUR MUSEUM ISN'T BUILT YET!

Lin-Manuel Miranda, creator of the hit Broadway musical HAMILTON, references us on page 137 in his book on Hamilton! ​

PICK UP A SOUVENIR AT THE

FIRST RESPONDERS FOR DEMOCRACY EXHIBITION AND WISH TO DONATE?

FROM ALBANY TO BROADWAY!

Lin-Manuel Miranda's 'shout-out' to The Museum of Political Corruption

​"...a museum that would not only detail Albany's many political scandals but also offer some possible solutions to corruption."

The Museum of Political Corruption, as part of its Reflections on Ethical Leadership, is collecting quotes from leaders and role models around the country in government, sports, business, education, the arts and religion.  This is a quote we received from former President Carter.  He writes it in his own hand and addresses it directly to Bruce Roter, MPC Founder and President:

The Museum of Political Corruption is dedicated to elevating the public’s understanding of corruption and encouraging solutions that promote ethics reform and honest government.  When built, a state-of-the-art facility, to be located in downtown Albany, will serve as a cutting-edge educational resource as well as an engaging gathering place.  It will also serve as a cultural landmark representing the region’s leadership in ethical governance. Immersive and interactive displays along with panel discussions, film screenings, and a host of timely rotating exhibits will offer a deeper understanding of corruption and its impact on society.

Chartered in 2015, the Museum of Political Corruption has been featured in the New Yorker Magazine, USA Today, Associated Press, The Huffington Post and on NPR’s All Things Considered.

The Museum of Political Corruption and its Center for Ethical Governance is committed to building a better future. Join us in building a museum that emphasizes empowerment and civic engagement.

You can help make corruption history with your generous donation.

While The Museum of Political Corruption does not investigate corruption, we want all citizens to feel that they can make a difference.  If you suspect corruption is happening, we encourage you to share your concerns with your state Attorney General’s Office (in New York: https://ag.ny.gov/bureau/public-integrity-bureau) or an appropriate ethics watchdog organization (for NY, it would be the New York State Joint Commission on Public Ethics at  https://jcopeny.gov/contact-us).

WHAT CAN WE DO? 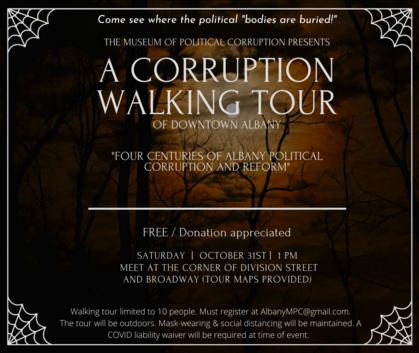